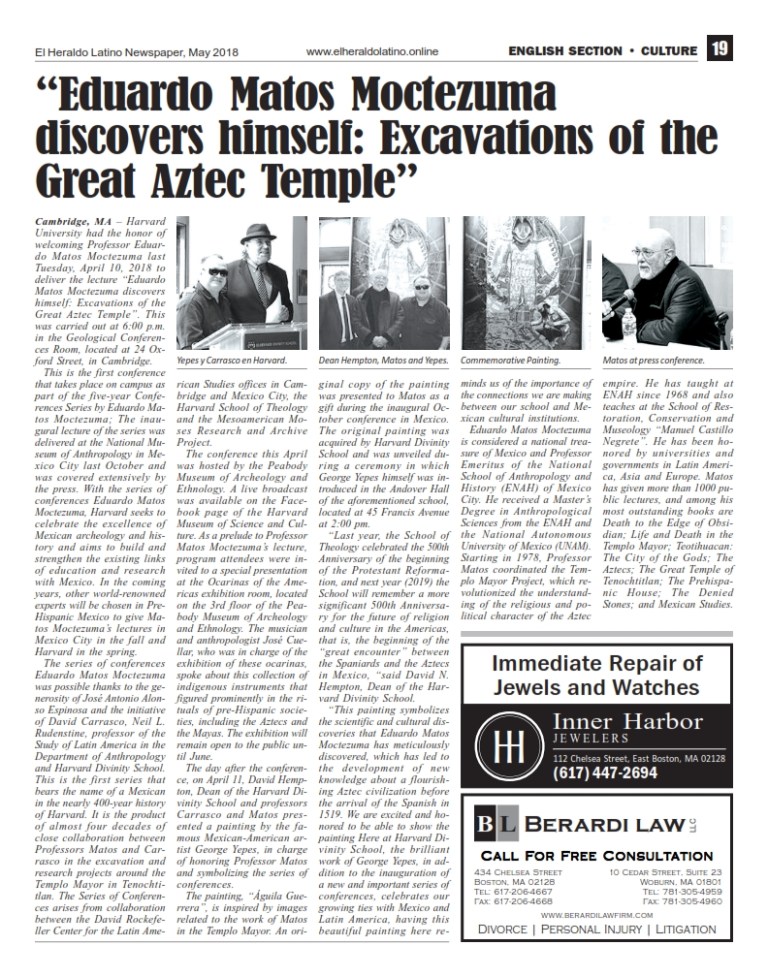 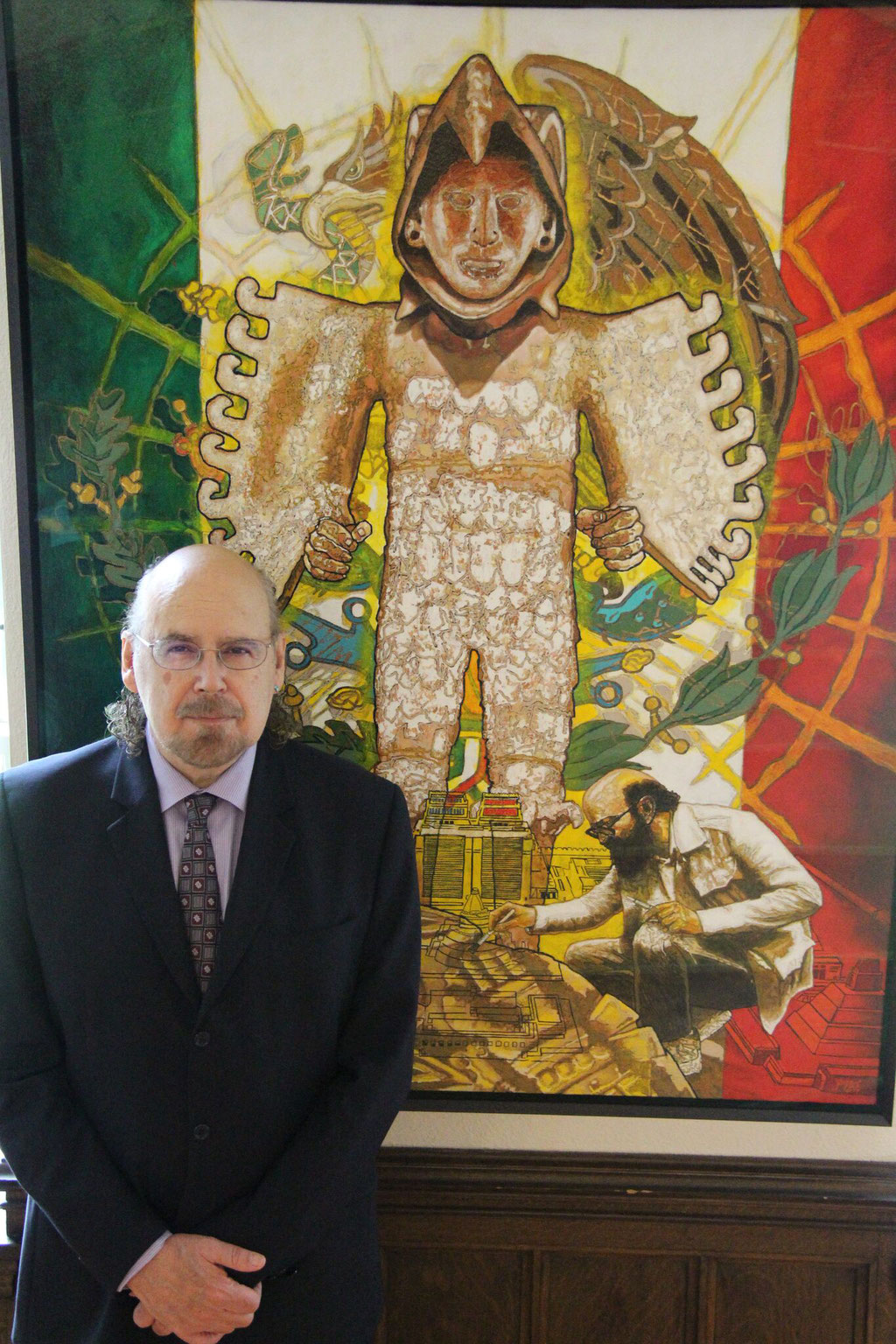 Photo: Professor Davíd Carrasco and Professor Eduardo Matos Moctezuma with the “Caballero Águila/Eagle Warrior” Hand-Painted Print (painted by George Yepes) at The Mexican National Museum of Anthropology and History, Mexico City, D.F., Mexico, October 3, 2017.
“Caballero Águila/Eagle Warrior” was created by George Yepes at the request of Davíd Carrasco to mark the launch of the Eduardo Matos Moctezuma Lecture Series, generously funded by José Antonio Alonso Espinosa, organized by the David Rockefeller Center for Latin American Studies at Harvard, and supported by Harvard Divinity School. The Eduardo Matos Moctezuma Lecture Series (Catedra Eduardo Matos Moctezuma) is possible thanks to the generosity of José Antonio Alonso Espinosa, the initiative of Professor Davíd Carrasco, and is supported by the Harvard Divinity School and the Moses Mesoamerican Archives. The David Rockefeller Center for Latin American Studies and the Mexican National Museum of Anthropology and History (Museo Nacional de Antropología, D.F., Mexico). The inauguration, at the Mexican National Museum of Anthropology and History, of the Catedra Eduardo Matos Moctezuma (The Eduardo Matos Moctezuma Lecture Series) on Tuesday, October 3, 2017.     As a way to cement the educational work between Harvard University and Mexico at this crucial time in the history of both, the David Rockefeller Center for Latin American Studies along with the Moses Mesoamerican Archive and the Harvard Divinity School have created this five year series of lectures (each year the lecture will be given once in Mexico and once at Harvard) in honor of Mexico's great archaeologist and cultural figure Eduardo Matos Moctezuma. This is the first time in the history of Harvard University that a lecture series has been named after a Mexican. This lecture series has been generously funded by Mexico's José Antonio Alonso Espinosa.  A number of Mexican educational institutions are working together with Harvard to make this Catedra Eduardo Matos Moctezuma a signature event in Mexico/Harvard relations.      To assist in commemorating this significant academic and cultural initiative the Moses Mesoamerican Archive asked George Yepes, one of the finest artists in the US to paint the "Caballero Aguila". The idea here, in part, is to link the Mexican American imaginary through Yepes' unique talents to this international educational partnership and the excellence of Eduardo Matos Moctezuma's scientific achievements and leadership. We hope that all of this leads to more educational exchanges and opportunities for students and researchers on both sides of the Mexico/US borderlands.  Davíd Carrasco Director Moses Mesoamerican Archive Neil L. Rudenstine Professor of Latin America Harvard University

Worldwide continues to expand our presence in the city. Conrad Dubai will cater to the needs of the ever

increasing number of global, affluent travellers, and the sophistication of the hotel will perfectly complement

the high-energy and vibrancy of Dubai."

"A jewel in The Conrad Dubai's crown is the Latin Supper Club, Izel, a carnival of Latin Artistry." 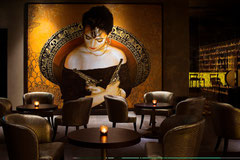 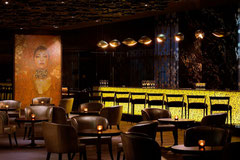 Yepes' marriage of Mexican and European art histories, mythologies, and archetypal forms create for a decidedly distinctive style of painting. His highly recognizable treatment of painting in monumental format calls upon classical master works by Tiepolo and Rubens for inspiration. His modern portraits, comprised of hundreds of delicate overlays that weave words and imagery throughout each composition, fuse together the sensuality of Klimt with the unabashed severity of graphic novels.

George Yepes, a.k.a. The Lone Wolf, was born in Tijuana, Mexico in 1956 and was raised in East Los Angeles' City Terrace neighborhood. Yepes, known as one of the painters from the Chicano Mural Movement of the late 1970s, has left his stylistic mark all over Los Angeles rich tapestry of visual culture; from his 28 murals around the City of Angeles, to his
paintings featured in Robert Rodriguez's films, Once Upon A Time In Mexico (2003) and Grindhouse (2007).


His paintings can currently be seen in the traveling exhibition Chicano Visions: American Painters On The Verge, at the
Los Angeles County Museum of Art June 15 - November 2, 2008.

Dr. Clarissa Pinkola Estes is a Poet, Psychoanalyst, Post-Trauma Specialist, and the Author of many books on the life of the soul. Her work is published in 39 languages, most recently Persian, Turkish, and Chinese. Her book, "Women Who Run With the Wolves: Myths and Stories of The Wild Woman Archetype" was on the New York Times Best Seller list for 145 weeks.

The Copyrights to all the art images including original paintings, limited edition art prints, hand painted prints, portrait commissions and open edition art prints on this belong to George Yepes. The fine art paintings or prints may not be used, in whole or part for any other product. No reproduction, copy, perform, publish, license, create derivative work from, may be made using any George Yepes’ images.

This website is Protected by the Copyright Laws of the United States of America. Pursuant to Title 17, United States Code, copyrighted work may not be copied, reproduced, distributed or publicly displayed without the consent of  he author or copyright owner. Any unauthorized use of georgeyepes.com, or any of its contents, in whole or in part, shall be considered by the copyright laws to the owner of this copyright. Should you infringe this copyright, you may be liable to the owner for relief such as  injunction, impounding and disposition of infringing articles, attorney’s fee, actual damages and any profits resulting from the infringement, or statutory damages up to $150,000 if the infringement was committed willfully.